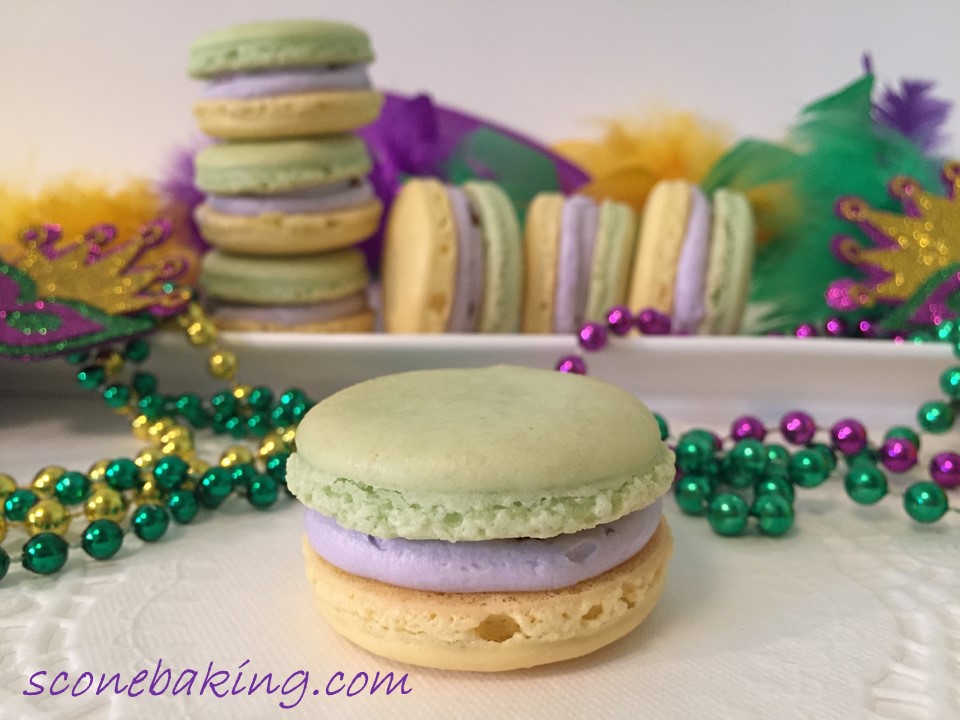 King Cakes are a sweet tradition during Mardi Gras, which officially begins on Epiphany Sunday, aka Twelfth Night, and ends on Fat Tuesday.  It is thought that the King Cake came to New Orleans from France in the late 1800’s.  The cake typically has a plastic baby hidden inside, representing Jesus.  Some King Cakes typically have cinnamon and pecans in it, then topped with the 3 colors of Mardi Gras.  Green symbolizes FAITH, Gold (yellow) symbolizes POWER, and Purple symbolizes JUSTICE.

I decided to put my own twist on a King Cake with my Mardi Gras King Cake Macarons. 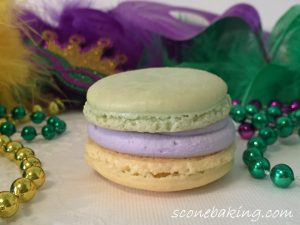 These delicious and festive Mardi Gras King Cake Macarons have all 3 colors of Mardi Gras, and are filled with cinnamon and candied pecans. 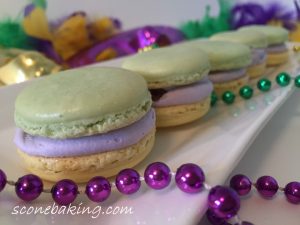 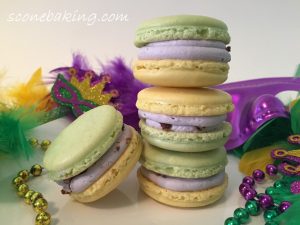 In medium bowl, whisk together powdered sugar and almond flour. Sift mixture through a sieve into another medium bowl. If there about a pinch remaining of pieces too large to sift, throw them out. Set aside.

On the computer make a template of 1-1/2″ circles about 2-inches apart, tape the paper together to get about 20 to a baking sheet (5 across by 4 down), place under parchment paper on one baking sheet. Fit two 12″ pastry bags with a 1/2-inch round tip (#1A tip). Carefully fill one bag with the yellow batter, and one bag with the green batter. Using the template as a guide, pipe yellow circles onto the parchment papers. Remove template and place under parchment on 2nd baking sheet, repeat with green batter. Tap each baking sheet on the counter to release trapped air bubbles. The peaks in the center should fall, if they don’t wet your finger, pat the down peak. Use a toothpick to release any air bubbles. Let the macarons stand at room temperature for 45-60 minutes to dry, which allows them to develop their crusts. While the macarons are standing at room temperature, preheat oven to 320 degrees F. Once they are dry to the touch, bake one baking sheet at a time, at 320 degrees F. for 13-15 minutes, until the top does not wiggly separate from the bottom (error on the side of overcooked). Cool slightly, remove from parchment (they should release, if not, use an offset spatula) Let cool completely. Match a green macaron with a yellow macaron, placing one filling side up and one filling side down.

Pipe the buttercream in a circle on the filling side up cookie.  Spoon 1/2 tsp. of the Candied Pecan Filling in the middle of the buttercream. Pipe buttercream on top of the Candied Pecan Filling. Press a green and a yellow macaron together until filling comes to the edge. Place in an airtight container, place in the refrigerator for 24 hours. Take the cookies out of the refrigerator 30 minutes before serving, to bring back to room temp.

Below is a link to my YouTube channel demonstrating how easy Mardi Gras King Cake Macarons are to make: