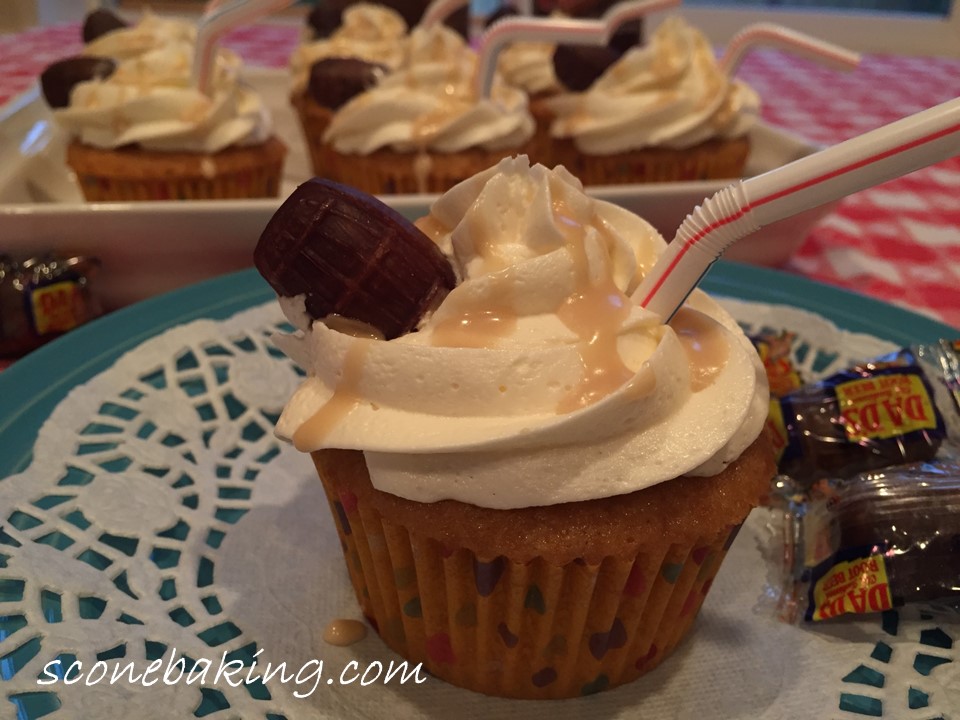 My husband and I love riding our motorcycles to Wally’s Drive-In in Buckley for Root Beer Milkshakes.  A few years ago he asked if I could make a Root Beer Float Cupcakes for his birthday.  So, on his birthday we had dinner with his family, and for dessert I served Root Beer Float Cupcakes.  They were a big hit.  To make them fun an festive, I added Root Beer Barrel Candies on top and gave each one a straw, so that they would look like root beer floats. 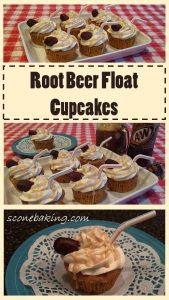 I tried just reducing down the root beer, but that didn’t give me enough root beer flavor in the cupcakes, so I added Watkin’s Root Beer Concentrate (not extract), which gave these cupcakes that wonderful root beer flavor.

Because these are Root Beer FLOAT Cupcakes, I made an Ice Cream Buttercream, which I piped on top of the cupcakes to look like soft serve ice cream.

To give these cupcakes an extra boost of root beer flavor, and to make them look more like a float, I topped these cupcakes with a delicious Root Beer Drizzle. 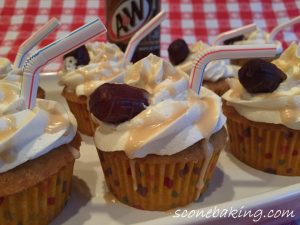 If you like root beer floats, you’ll love these Root Beer Float Cupcakes with an Ice Cream Buttercream and Root Beer Drizzle. 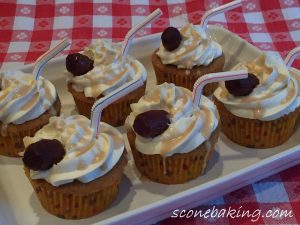 2 cups root beer (to be divided after reduction) 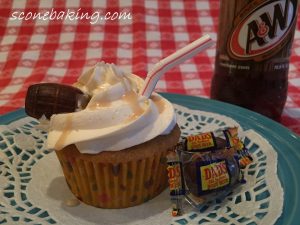 In a small saucepan on medium heat, simmer until mixture reduces to 3/4 cup plus 2 Tbsp. (about 25-30 minutes) stirring occasionally.  Divide reduction (3/4 cup for the cupcakes and 2 Tbsp. for the root beer drizzle); set aside to cool completely.

Preheat oven to 350º F.  Prepare muffin tin with paper liners.  Whisk together both flours, baking powder, and salt in medium bowl; set aside.  In a stand mixer fitted with paddle attachment, cream butter and sugar for 3 minutes; add eggs, one at a time on low speed until incorporated.  Mix in root beer concentrate.  On slow speed add flour mixture and 3/4 cup of reduced root beer, alternating 1/2 each at a time.  Beat on slow speed until just combined.  Scrape down sides of bowl with rubber spatula and mix by hand. (Do not overmix)

In a large mixing bowl, beat unsalted butter until light and fluffy (5 minutes).  Add sifted powdered sugar 1/2 at a time (beating 5 minutes each time).  In a small bowl whisk together ice cream and vanilla extract; add 1/2 to buttercream, beating for 5 minutes; add more as needed to get piping consistency (you may not use all of the ice cream mixture).  Fit a 16″ pastry bag with a #1M piping tip.  Fill pastry bag with Ice Cream Buttercream, pipe on cooled cupcakes.

Once cupcakes are cooled, whisk together 2 Tbsp. root beer reduction, 1/4 tsp. root beer concentrate, and 1 cup sifted powdered sugar until smooth.  Put icing into a ziplock bag, cut a hole in the corner (or put in a small squeeze bottle) and drizzle on cupcakes (the extra drizzle can be used as a topping on ice cream, root beer floats, etc.).  Top each frosted cupcake with 1 Root Beer Barrel candy and a straw (cut to fit). 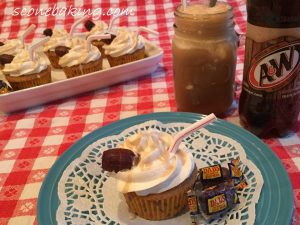 (If you are not serving the cupcakes right away, store in refrigerator.).

For a video demonstrating how to make these delicious cupcakes, watch my YouTube channel:  Scone Baking and Beyond (click on the link below).